It’s the first Tees–Wear derby in four years this Sunday as Sunderland host Middlesbrough, but the game that unfolds on the field may not live up to the pre-match excitement as there have been historically few goals in these clashes.

Prediction: If there is to be a winner, one goal should do it

Sunderland are very slight favourites for this match, which makes sense given that last season they were fairly decent at home – they may have been the 3rd worst away team in the Premier League last year but they were the 12th best home team – and given how well they’ve done in their other local derby in recent years. Against now-relegated Newcastle, they were unbeaten in their last nine derby meetings and won six of those nine, so it’ll be interesting to see if the Black Cats can get just as hyped up for their derby against Middlesbrough as they did for those matches against Newcastle. 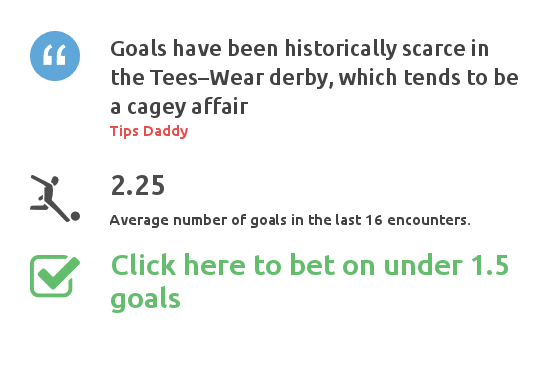 Whatever the outcome, our tip is to expect this contest to be an especially close one, one which could be decided by a solitary goal. Goals have been historically scarce in the Tees–Wear derby, which tends to be a cagey affair, and there has been an average of just 2.25 goals across their 16 encounters this century.

That is why it could be a smart predication to back ‘under’ in an over/under bet on the number of goals. Bet365 has odds of 8/15 on there to be fewer than 2.5 goals on Sunday, but their odds of 13/8 for there to be under 1.5 goals is even more intriguing given that when these two sides last met – in 2012 in the League Cup –Middlesbrough won 1-0.

Top tip: Sunderland and Middlesbrough to share the spoils

As mentioned above, if there is to be a winner then one goal could decide it, but this match may well finish as a draw. Not only did Middlesbrough draw their final four matches of The Championship last season to secure promotion, but they also kicked off their Premier League campaign with a 1-1 draw against Stoke City.

The fact that only five teams last Premier League season earned more draws than the 12 that Sunderland picked up under Sam Allardyce also backs up any theory that predicts a draw this Sunday.

Our tip for bettors is to stick some money on Bet365’s odds of 11/5 for this Sunday lunchtime duel to finish with both teams taking home a point.

Bet On a Draw Now