Last season’s Premier League top two, Leicester and Arsenal, go head to head on Saturday afternoon and our tips and predictions suggest fans at the King Power Stadium can expect to be treated to goals galore.

Prediction: There will be at least four goals as Leicester and Arsenal play out another thriller

Both Arsenal and Leicester put their leaky defences on show last weekend, as the Premier League champions fell to a 2-1 loss to Hull, while one day later Arsenal were torn apart in a 4-3 Liverpool win at the Emirates.

That is reason enough to expect there to be goals when these two teams go head to head on Saturday, but the recent history of this fixture also suggests that the net will ripple multiple times over the course of the 90 minutes. In each of the last eight Premier League meetings between Leicester and Arsenal, both teams have scored, with an average of 3.5 goals scored over the course of those eight matches.

Tips Daddy suggests punters should consider staking money on a bet for over 3.5 goals – which Bet365 is offering at odds of 7/4. Anyone who placed such a bet on Arsenal’s match against Liverpool last weekend would have been counting their winnings with over half an hour to go and the fact that the Gunners don’t look like signing any defensive reinforcements in time for the weekend, means a similar scenario could play out on Saturday. In fact, there were over 3.5 goals when these two met in this fixture last campaign, with Arsenal cancelling out Jamie Vardy’s brace by netting five times.

Here’s another tip: Arsenal should find a way to win

So if there are plenty of goals flying in at the King Power Stadium, who is going to score the most?

Well Tips Daddy says that Arsenal have an excellent record against Leicester in recent seasons and they have not actually lost a Premier League match to the Foxes since 1994. Although Leicester ended up winning the title last season, Arsenal did the double over them by winning 5-2 at the King Power Stadium and then 2-1 in the return fixture in London. 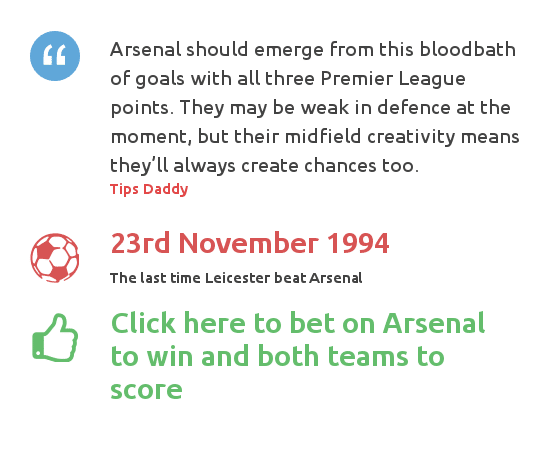 That’s why Arsenal should emerge from this bloodbath of goals with all three Premier League points. They may be weak in defence at the moment, but their midfield creativity means they’ll always create chances too. The odds on Arsenal to win and on both teams to score are incredibly intriguing, therefore, with Bet365 offering odds of 10/3 for that to happen.

BET ON ARSENAL TO WIN AND BTTS