Sunderland play against Everton at the Stadium of Light this weekend, and the fans are hoping boss David Moyes can get his first competitive win as boss against his former club!

Sunderland were unlucky last time out against Southampton….

They took the lead with 10 minutes to go by way of a Jermain Defoe penalty, but Southampton equalised just five minutes later. Everton are doing well under Ronald Koeman, and are unbeaten going in to this game. Their opening day draw with Spurs was followed by solid wins over West Brom and Stoke. Read on for more betting tips:

Football Tips for Sunderland vs Everton 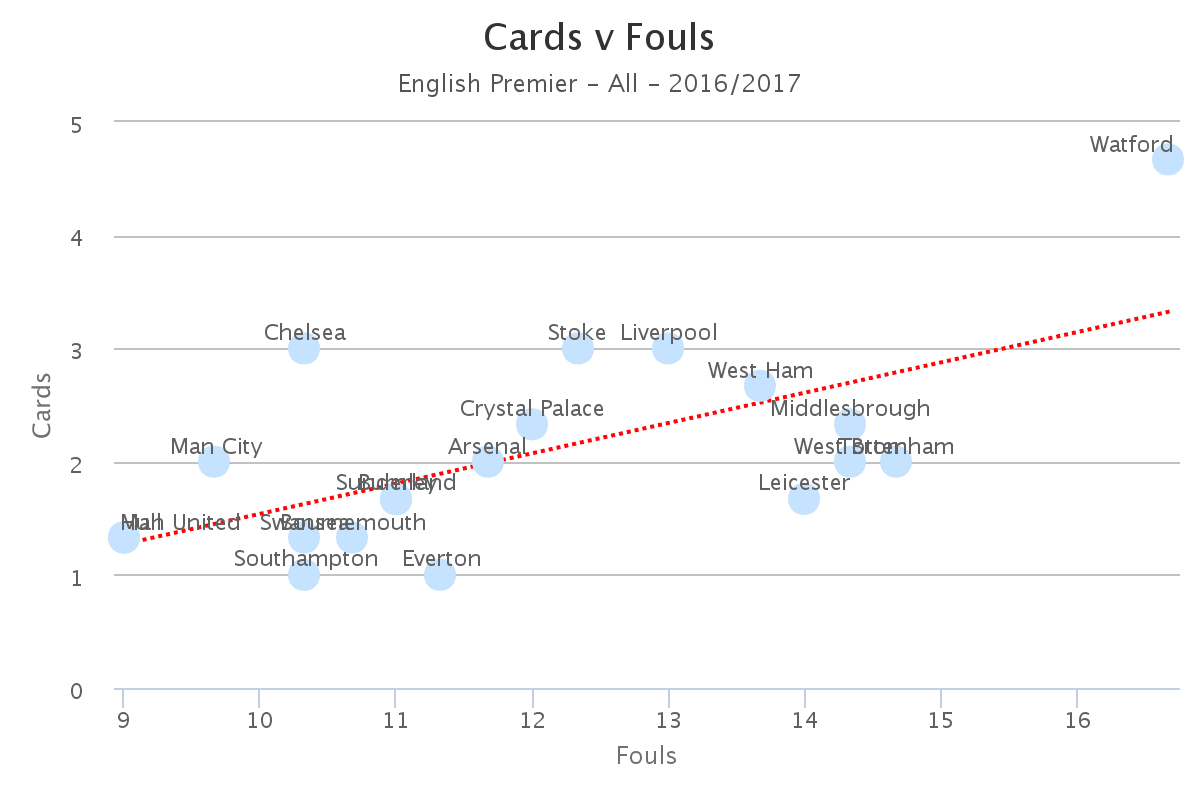 This chart is from Footcharts and shows that all games so far this season have had at least 1 yellow card. Therefore it makes sense to bet at 4/1 odds on there being a yellow card for Sunderland vs Everton.

History of Sunderland vs Everton

Sunderland and Everton are historically very close in victories:

Sunderland have won 71 against Everton’s 80, and there have been 30 draws. Sunderland were able to secure Premier League safety in this match near the end of last season, beating Everton 3-0. That result also avenged the Toffees’ 6-2 drubbing of the Black Cats at Goodison Park earlier in the season.

That shows there are lots of goals when these two teams meet….

The last time they played out a goalless draw was Boxing Day, 1983 – so expect someone to find the net in this one. It wouldn’t be a wild prediction to say that there will possibly be 2 or more goals on display.

Sunderland were unlucky not to take all three points against Southampton!

They took the lead via a Jermain Defoe penalty ten minutes from time before Jay Rodriguez stepped up to score his first goal since March 2014. That goal was largely down to a glaring error from the otherwise excellent goalkeeper Jordan Pickford…

…they did go on to beat Shrewsbury in the EFL Cup a few days later, thanks to a sole strike from loanee Adnan Januzaj.

Everton managed a 1-0 win at home to Stoke in their last match, thanks to an own goal from former Sunderland keeper Shay Given. They have been in fine form in the league this season, and are unbeaten from their opening three matches. They look a different side under Ronald Koeman’s management.

Everton being unbeaten, coupled with Sunderland having failed to win a match in the league so far, would seem to indicate you should bet on an away win in this game, but in football you never can tell!

Everton to win is 21/10. That may not be a bet that truly excites, but it’s certainly a fair prediction to make given both teams’ league form ahead of kickoff. A better bet is for a yellow card to be shown which is priced at 4/1:

Football Tips of the Match

For the game to see over 3.5 goals is 12/5. While that may be a bit of a random shout, there were 11 goals in the two corresponding league games last season – admittedly with eight of them in one of those games.

Sunderland want to get their first league win of the season, while Everton just look a different class compared to last season.

Rarely do these two teams fail to deliver on the entertainment front! With a fifth minute chant planned for a local boy who needs money for treatment, this will hopefully be a magnificent evening of entertainment at the Stadium of Light!

A photo posted by Everton (@everton)