Tottenham have been dealt a major blow with the news that their captain and number one keeper Hugo Lloris will be sidelined with injury for around a month and Crystal Palace should be able to capitalise when they visit White Hart Lane on Saturday.

Prediction: Spurs will score, but Palace will too

It’s no surprise that Tottenham are strong favourites for this match against Crystal Palace in their first home game of the season. They drew 1-1 against Everton last weekend, but were denied the win by some excellent goalkeeping from Everton’s Maarten Stekelenburg.

This weekend, though, Spurs may struggle to put together a similarly impressive goalkeeping highlights reel given that their starter beneath the sticks, Hugo Lloris, has been ruled out with a hamstring injury. Michel Vorm replaced him in the match at Goodison Park, but he is simply not of the same quality as the French shot stopper. Last season Lloris missed just seven Tottenham matches and his side conceded in six of them. The season before he sat out 13 games, and in nine of them there was a goal scored against his replacement. 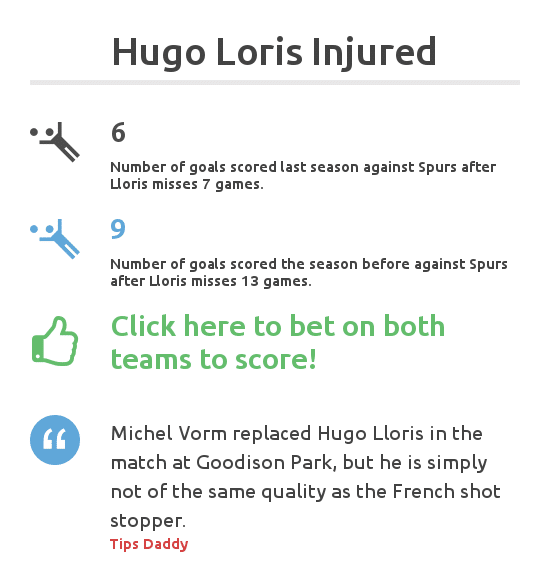 That is why Tips Daddy’s tip is for a smart bet to back both teams to score – which Bet365 is pricing at evens. Only two teams scored more than the 35 home goals Spurs got last Premier League season, so they are likely to get on the scoresheet themselves, but they’ll be joined by Palace if Alan Pardew’s side can exploit the weakness created by Lloris’ absence.

BET ON BOTH TEAMS TO SCORE

Tip: There are excellent odds on Tottenham to come from behind to win

This bring us to the second tip for this match. Assuming both teams do score in this fixture, one really good value bet would be to back Tottenham to win from behind – which Bet365 has priced at 7/1.

Bet on Tottenham to Win from Behind

Their meeting last season – which Spurs won 3-1 at Selhurst Park – was one of those matches in which Tottenham came from behind to win and which Palace threw away. A first half Jan Vertonghen own goal was cancelled out by three second half efforts from Mauricio Pochettino’s side, so a similar unfolding of events would not be at all surprising on Saturday.