Tom Naylor’s header got Burton a first away point in the Championship against Blackburn Rovers on Saturday. Things look like they are going well but against Liverpool they will not be so fortunate. In all likelihood Burton will defend and defend and Klopps team at the moment is inconsistent. But barring another one of Burtons late goals, the Reds will cruise through this fixture. Here is Tips Daddy’s prediction: 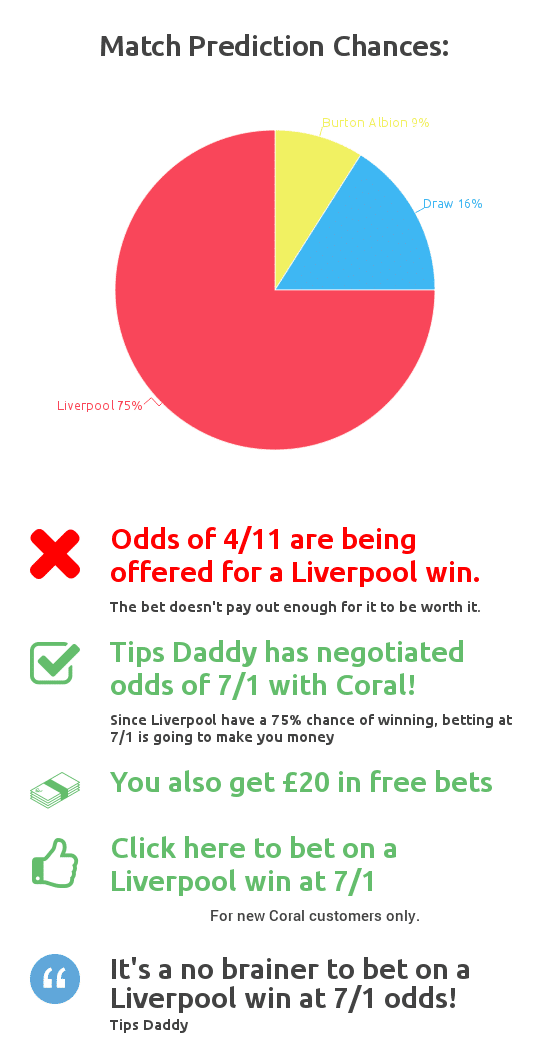 The Clarets won their first league game against Liverpool since September 1974, having gone seven without a win since then. This shows that Klopp has not sorted out the Liverpool defence yet. It what was an all too familiar set of events, Liverpool had all of the ball and all of the shots, but had no clear-cut chances. With our Coral offer of 7/1 odds against Burton, even a shocking Liverpool defence makes this a good bet.

FIFA has its own prediction of this Burton vs Liverpool fixture. It’s quite a decent video from a Liverpool perspective! Its based on a fictional FA Cup meeting:

Even Sadio Mane, who is recovering from injury and won’t be playing against Burton, think its a good idea to bet on a Liverpool win! Here he is thanking fans for their support during injury:

This is the best offer and easiest money Tips Daddy has offered so far, so don’t miss out on this bet: