Burnley will be up for it when Liverpool arrive at Turf Moor, but overall their primary goal will be to fight against relegation. There isn’t a predictions crystal ball present of course, but it remains an important target nevertheless. Sean Dyche has done a great job there, but they could be in for a long afternoon here. 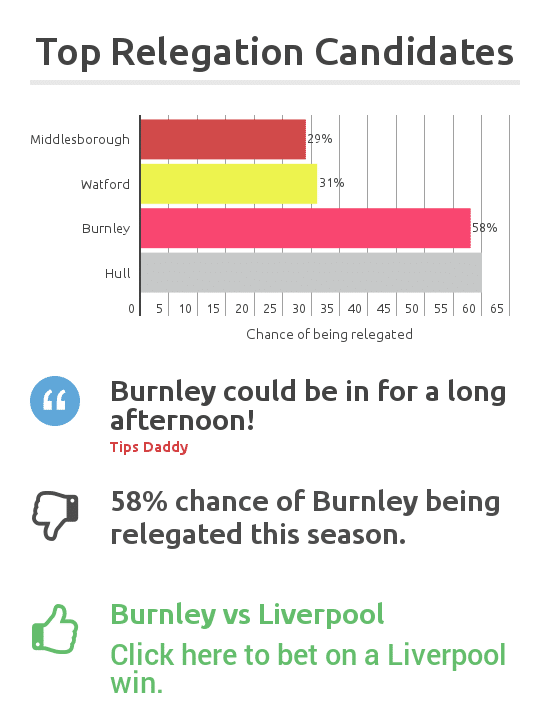 Jurgen Klopp is set to enjoy his first full season as Liverpool manager, having arrived last October to take over from the departed Brendan Rodgers. With a couple of transfer windows under his belt at Anfield, Klopp will be hoping to guide his team higher than their eighth place finish last season, and European football next season will definitely be high on the agenda.

Liverpool are pretty much runaway favourites for this one, with Bet365 backing them at 1/2. Given the difference in ambitions, it is difficult to argue with that.

Burnley’s return to the top flight of English football wasn’t exactly a fairytale, as they fell short at home to Swansea. There were positives to take however – they looked resolute and organised, and not overwhelmed at all. Indeed, only a late Swansea strike could end their hopes of getting points straight on the board. This task, however, is a very different one to the one they faced last week and makes football tips this week a difficult task.

Liverpool, meanwhile, fared better than perhaps many would have expected. They travelled to the home of old rivals Arsenal, and came away with a win after a thrilling 4-3 epic. The list of scorers from that game reads like a Southampton Alumni page. Theo Walcott, Alex Oxlade-Chamberlain and Callum Chambers scored for the Gunners. Liverpool’s contribution to that came from Adam Lallana and Sadio Mane. Only Phillipe Coutinho, who scored a brace, has never played for Saints, but his goals proved decisive.

Bet Of The Match

Liverpool had a great time in front of goal last weekend at Arsenal, while Burnley couldn’t quite find their footing. Bet365 believe Liverpool can continue that fine form and are offering a tasty 14/1 on them winning 3-1. That looks like a great value addition to your betting slip.